Chapel of the Four Chaplains 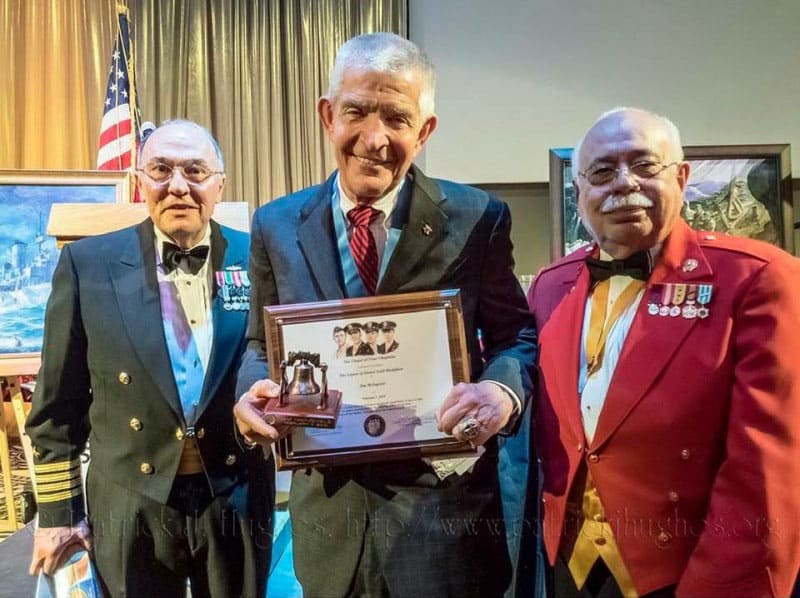 My pleasure to nominate and award Capt. Louis Cavaliere, the Chapel of the Four Chaplains Gold Medallion to Jim “Mattress Mack” Mclngvale. It was presented at the Chapel of Four Chaplains 51st Annual Awards Banquet in Philadelphia, PA. Commemorating the 76th Anniversary of the sinking of the USAT Dorchester. Thursday, February 7, 2019 .

The Legion of Honor Award programs publicly recognizes and honors outstanding members of society whose lives model the giving spirit and unconditional service to community, nation, and humanity without regard to race, religion, or creed exemplified so dramatically by the Four Chaplains. To be considered for any of the five awards, the selfless and transformative achievement must be above and beyond that of a professional resume or organizational position.
Legion of Honor Gold Medal
The Legion of Honor Gold Medallion is the highest and most prestigious award presented at this time. It is given to a person whose leadership has brought his actions to worldwide attention, and whose very life epitomizes the spirit of the sacrifice of the Four Chaplains.
Legion of Honor Gold Bronze Medal
The Legion of Honor Bronze Medallion is the second highest award and is granted for extraordinary contributions to the well-being of others at the national or world level, to world peace, or to inter-faith and inter-ethnic understanding.
Junior Legion of Honor Award
The Junior Legion of Honor Award is given to young people who have contributed to the improvement of the inter-ethnic and inter-faith harmony in their communities. Their contribution must symbolize the sacrifice of the Four Chaplains to selfless service.
Legion of Honor Humanitarian Award
The Legion of Honor Humanitarian Award is given in recognition of a lifetime commitment to selfless service and societal advancement that has demonstrably affected the quality of life in the community, state or nation, service without regard to faith or race. The selection process for this award is rigorous.
Charles W. David, Jr. Lifesaving Medallion

The Charles W. David, Jr. Lifesaving Medallion is rarely awarded and is given to persons who have saved the life of another at grave personal risk.

Nominations are accepted for any of these awards from past recipients of the Legion of Honor; church and government leaders; and leaders of civic, fraternal and veteran organization only. All awards must be publicly presented at a Legion of Honor service or as part of an appropriate ceremony which includes the Saga of the Four Chaplains. For past Legion of Honor recipients, you do not need to go through your local Detachment to submit nominations.

The Story of the Four Chaplains

It was the evening of Feb. 2, 1943, and the U.S.A.T. Dorchester was crowded to capacity, carrying 902 service men, merchant seamen and civilian workers.

Once a luxury coastal liner, the 5,649-ton vessel had been converted into an Army transport ship. The Dorchester, one of three ships in the SG-19 convoy, was moving steadily across the icy waters from Newfoundland toward an American base in Greenland. SG-19 was escorted by Coast Guard Cutters Tampa, Escanaba and Comanche.

Hans J. Danielsen, the ship’s captain, was concerned and cautious. Earlier the Tampa had detected a submarine with its sonar. Danielsen knew he was in dangerous waters even before he got the alarming information. German U-boats were constantly prowling these vital sea lanes, and several ships had already been blasted and sunk.

The Dorchester was now only 150 miles from its destination, but the captain ordered the men to sleep in their clothing and keep life jackets on. Many soldiers sleeping deep in the ship’s hold disregarded the order because of the engine’s heat. Others ignored it because the life jackets were uncomfortable.

On Feb. 3, at 12:55 a.m., a periscope broke the chilly Atlantic waters. Through the cross hairs, an officer aboard the German submarine U-223 spotted the Dorchester. The U-223 approached the convoy on the surface, and after identifying and targeting the ship, he gave orders to fire the torpedoes, a fan of three were fired. The one that hit was decisive–and deadly–striking the starboard side, amid ship, far below the water line.
Captain Danielsen, alerted that the Dorchester was taking water rapidly and sinking, gave the order to abandon ship. In less than 20 minutes, the Dorchester would slip beneath the Atlantic’s icy waters.
Tragically, the hit had knocked out power and radio contact with the three escort ships. The CGC Comanche, however, saw the flash of the explosion. It responded and then rescued 97 survivors. The CGC Escanaba circled the Dorchester, rescuing an additional 132 survivors. The third cutter, CGC Tampa, continued on, escorting the remaining two ships.

Aboard the Dorchester, panic and chaos had set in. The blast had killed scores of men, and many more were seriously wounded. Others, stunned by the explosion were groping in the darkness. Those sleeping without clothing rushed topside where they were confronted first by a blast of icy Arctic air and then by the knowledge that death awaited.

Men jumped from the ship into lifeboats, over-crowding them to the point of capsizing, according to eyewitnesses. Other rafts, tossed into the Atlantic, drifted away before soldiers could get in them.

Quickly and quietly, the four chaplains spread out among the soldiers. There they tried to calm the frightened, tend the wounded and guide the disoriented toward safety.

“Witnesses of that terrible night remember hearing the four men offer prayers for the dying and encouragement for those who would live,” says Wyatt R. Fox, son of Reverend Fox.

One witness, Private William B. Bednar, found himself floating in oil-smeared water surrounded by dead bodies and debris. “I could hear men crying, pleading, praying,” Bednar recalls. “I could also hear the chaplains preaching courage. Their voices were the only thing that keptme going.”

Another sailor, Petty Officer John J. Mahoney, tried to reenter his cabin but Rabbi Goode stopped him. Mahoney, concerned about the cold Arctic air, explained he had forgotten his gloves.

“Never mind,” Goode responded. “I have two pairs.” The rabbi then gave the petty officer his own gloves. In retrospect, Mahoney realized that Rabbi Goode was not conveniently carrying two pairs of gloves, and that the rabbi had decided not to leave the Dorchester.

By this time, most of the men were topside, and the chaplains opened a storage locker and began distributing life jackets. It was then that Engineer Grady Clark witnessed an astonishing sight.

When there were no more lifejackets in the storage room, the chaplains removed theirs and gave them to four frightened young men.

“It was the finest thing I have seen or hope to see this side of heaven,” said John Ladd, another survivor who saw the chaplains’ selfless act.

As the ship went down, survivors in nearby rafts could see the four chaplains–arms linked and braced against the slanting deck. Their voices could also be heard offering prayers.
Of the 902 men aboard the U.S.A.T. Dorchester, 672 died, leaving 230 survivors. When the news reached American shores, the nation was stunned by the magnitude of the tragedy and heroic conduct of the four chaplains.

The only surviving life jacket from the USAT Dorchester, located at the U.S. Army Chaplain Museum, Ft. Jackson, South Carolina