A letter from a grateful family 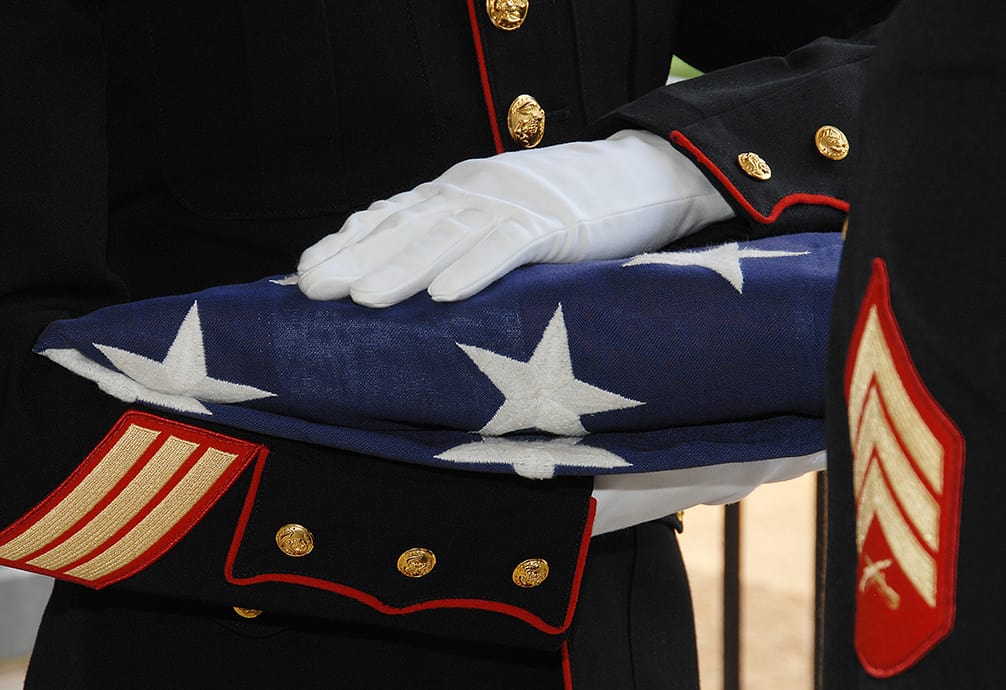 The following is a letter I received from a civilian family member at WWII Marine and MCL Member Mr Kings funeral, and asked me to pass this on. -Bones

I stepped out of the church and was speechless, my thoughts of grief were gone, all of a sudden I was overwhelmed with pride in my family and my country

There before me was Marines, young and old standing like angels around our loved one.

As the Hurst rolled near the Cemetery I was jolted by Marines snapping to attention and saluting with rifles, a sword reflected the sun in all of our eyes, we were afraid to walk past, afraid we would break some bond or rule. A young Marine very politely asked us to move on up.

And then as if by telepathic orders two Marines in Blues walked up to the casket saluted very slow, picked up the flag and then I heard a very loud "port arms", I had no idea what that meant but I will never forget those words as long as I live because of what came next.

The respect and dedication you few,
you proud, you Marines gave that day
will forever stay in my heart and the heart
of our Family,  thank God for Marines.

The guns sounded like one, the sound of the gunshots echoing in the Cemetery gave goosebumps to all. The metal sound (M1 clips) the guns made on the last shot was bone-chilling. Then Taps, oh my God, I lost it.

Next, I see the Marines fold the flag with great respect as if that flag was the last one on earth. The respect to every corner, every fold was unbelievable. Once folded that Marine got down on one knee, I could not hear what the Marine was saying but he had tears rolling down his face as he was talking to our family member. It was as if our loved one was his Brother.

Some of us knew we have Marines in our family but had no idea of the level of Pride and Honor Marines have.

The Marines all marched out of the Cemetery and I'm thinking that was the end of Honors. I was almost back to my car and I take one last look at the Grave, and there once again Marines were standing around our loved ones Grave like angels. I could not believe what I was seeing.

I walked back to the Grave and as I approached I hear them carrying on conversations and having a good time as if our loved one was their long-time friend.

As the casket began to lower into the Grave all Marines there even our Family members that are Marines start singing.

That song was in harmony, who knew Marines can cry and sing. Once more I had goosebumps. At the end of the song they threw something into the Grave said something about Chesty and that King was a Real Marine, then they all saluted, said a very loud Semper Fi and walked away.

The respect and dedication you few, you proud, you Marines gave that day will forever stay in my heart and the heart of our Family,  thank God for Marines.

The song was the Marine Corps Hymn and the something we tossed in the Grave was EGA's and a cigar. EGA's we throw in the grave at all Marine funerals, the cigar? Well, Mr. King had told us the story of how he was busted to Pvt.

Mr kings Marine son, two Marine grandsons, and his great-grandson  (in blues, had just graduated from boot camp) joined us at the grave paying final respects. A big Semper Fi to the King family.